Midnight Madness happens in College Park Friday night. Here’s how the experts around the country, and some total f-tards, rank the Terps this preseason. The best is #17, the worst is #45. 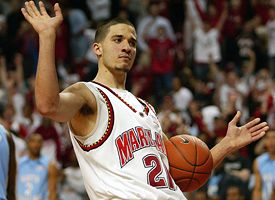 Greivis says the rankings are this far apart.

Midnight Madness is only three weeks away. Here’s what’s happening with the Terps.

Lindy’s College Basketball preseason magazine named their top programs of the decade. Guess who made the top 10.

Sporting News named their top shooting guards in the country. Guess who made the top two.

Fanhouse has a good post about the new Len Bias documentary.

Gary was on a local radio show this morning and they started talking about his Twitter feed. Gary admitted that a staffer does the typing for him so they asked if he knew what the messages were called. He did not. They told him they were tweets and he replied, “How can you be a man …” Which reminds me, did you know you can follow SWAGLESS on Twitter? Were @SWAGLESSNetwork